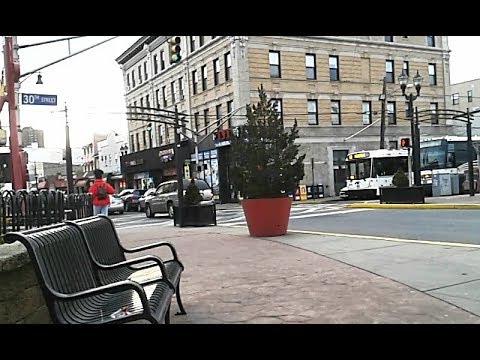 Welcome to Union City, NJ, USA! This video shows street scenes from the city of Union City in New Jersey, in the United States. From 49th Street to Paterson Plank Rd (1st street), from Park Avenue to Kennedy Blvd, Citywide. Some of the streets that was recorded was Bergenline Avenue, Broadway, Park Avenue, 32nd Street, Palisade, Kennedy Blvd, Kerrigan Ave, Summit Ave, and much more. Also, the Hudson Bergen Light Rail Station in Bergenline was recorded. Obviously, not everything was recorded, otherwise, the video would be very long.
Union City has a population of more than 67,000 and is just about 1.3 miles square miles, and is the most densely populated city in the US. It’s close to New York City and accessible. Some of the video clips was recorded in the borders of Union City, but focusing in Union City. For example, near the border of Jersey City / Union City once. Also, near the border of Weehawken twice (and recording in the Union City side and focusing in UC). Near the border of North Bergen twice, and near the border of West New York twice. The rest, was pure Union City. Please subscribe, so you been notify, since I will still making similar videos.

Very energetic blog, I loved that a lot. Will there be a part 2?|
hi http://jlskdjflksdjf.net