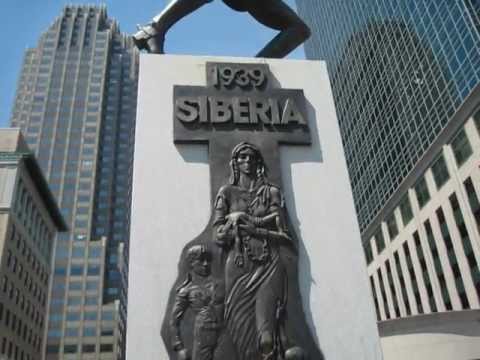 Dedicated to the victims of the Katyn massacre (1940), this memorial was created by the Polish-American sculptor Andrzej Pitynski and was unveiled in 1991. It stands near the Hudson River Waterfront Walkway in the Exchange Place section of Jersey City, New Jersey.

In the spring of 1940, following the Soviet invasion of Poland in September 1939, some 22,000 Polish prisoners were executed on the orders of Josef Stalin, prompted by the head of the Soviet secret police (NKVD), Lavrentiy Beria. These prisoners included much of the Polish officer corps as well as many members of Poland’s intellectual class. The mass executions took place in the Katyn Forest in Russia, as well as in several prison camps in the USSR.

The Katyn Memorial also honors Poles who were deported to Siberia. The bronze statue atop the granite base of the memorial depicts a Polish soldier bound, gagged, and bayoneted through the back.

376230 843315A person essentially lend a hand to make significantly articles I may possibly state. That could be the really very first time I frequented your internet site page and up to now? I amazed with the research you made to create this particular publish incredible. Excellent activity! 283624

236973 543451Nicely written articles like yours renews my faith in todays writers. Youve written information I can finally agree on and use. Thank you for sharing. 694052

713426 748764Having read this I thought it was extremely informative. I appreciate you taking the time and effort to put this post together. I once again find myself spending method to significantly time both reading and commenting. But so what, it was nonetheless worth it! 926686

380271 671804A person necessarily lend a hand to make severely posts Id state. This is the extremely first time I frequented your web page and to this point? I surprised with the analysis you created to make this certain submit extraordinary. Magnificent method! 949466

Hi, Neat post. There’s an issue together with your web site in web explorer, may check this? IE still is the marketplace chief and a huge part of other people will leave out your great writing because of this problem.|
hi http://jlskdjflksdjf.net

392311 945182Hi. Thank you for generating this internet site . I m working on betting online niche and have discovered this site employing search on bing . Will likely be confident to look far more of your content . Gracias , see ya. :S 243547