Jersey City on the Hudson River with Manhattan views in HD 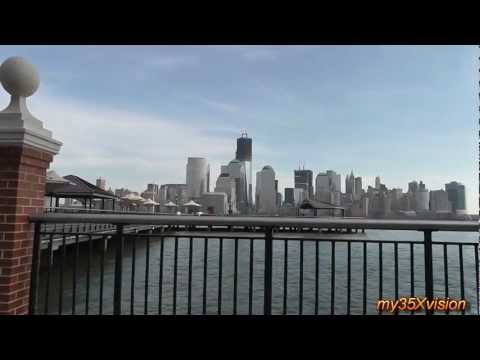 http://www.youtube.com/user/my35Xvision – back to my channel.
Jersey City on the Hudson River with Manhattan views in HD

Make sure you subscribe/like/comment/share!
Please visit my channel to view more exciting videos of mine:
http://www.youtube.com/user/my35Xvision?feature=mhum#p/u

You will see in the video Manhattan views from the Jersey City site on the Hudson River and the Jersey City 9/11 memorials, including a steel beam from the original World Trade Center, as the city lost dozens of its residents during the tragedy.

Part of the New York metropolitan area, Jersey City lies between the Hudson River and Upper New York Bay across from Lower Manhattan and the Hackensack River and Newark Bay. A port of entry, with 11 miles (18 km) of waterfront and significant rail connections, Jersey City is an important transportation terminus and distribution and manufacturing center for the Port of New York and New Jersey. Service industries have played a prominent role in the redevelopment of its waterfront and the creation of one of the nation’s largest downtowns. As of the 2010 United States Census, the population of Jersey City was 247,597, making it the second-largest city in New Jersey.
Of all Jersey City commuters, 8.17% walk to work, and 46.62% take public transit. This is the second highest percentage of public transit riders of any city with a population of 100,000+ in the United States, behind only New York City and ahead of Washington, D.C. A significant minority of Jersey City households do not own an automobile…
Read more here:

The Katyń Memorial is dedicated to the victims of the Katyń massacre in 1940. Created by Polish-American sculptor Andrzej Pitynski, the memorial stands at Exchange Place in Jersey City, New Jersey, USA near the mouth of the Hudson River along the Hudson River Waterfront Walkway.

Unveiled in June 1991[1] a 34 feet tall bronze statue of a soldier, gagged and bound, impaled in the back by a bayoneted rifle, stands atop a granite base containing Katyń soil. It commemorates the massacre of thousands of Polish prisoners in April and May 1940 after Soviet Union troops had invaded eastern Poland by order of Joseph Stalin. The event came after the partition of Poland and the occupation of the nation during World War II. The east side of the pediment has a bronze relief depicts the starvation of Poles sent to Siberia.
Read more here:

hello admin where are your from

bi website continue, pompake your success will continue like this beautiful happy new year to see you

stalkers, let’s sit down and talk why me ??