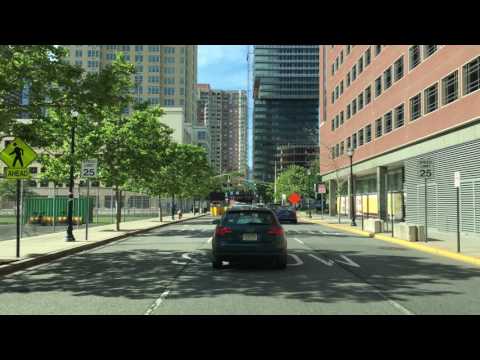 Like Historic Downtown, the Waterfront of Jersey City is an area rich in history and full of current development. It is the location of the end of the Morris Canal and there is still a segment of this basin surrounded by Liberty State Park. The giant Colgate Clock, next to the Goldman Sachs Tower reminds people of the industry that used to line the Hudson River on New Jersey’s Coast. Many of the names of Jersey City’s downtown neighborhoods come from Dutch words or Dutch names from the early inhabitants along the Hudson. Paulus Hook is a quiet mostly residential neighborhood stretching to the west from the Goldman Sachs building. Its main streets are Essex and Morris Streets and its waterfront is along the Morris Canal, where it maintains a walkway which is part of Jersey City’s longer waterfront walkway. The Essex Street station on the Hudson-Bergen Light Rail and the development of office buildings to the east have allowed more businesses to line Morris Street including a number of restaurants with outdoor seating. The Paulus Hook and Grove Street neighborhoods, unlike many other redeveloped neighborhoods on the Hudson have undergone the same revitalization with less gentrification. The Newport/Pavonia, Harborside Financial Center and Exchange Place neighborhoods on the waterfront are experiencing significant construction of high-rise towers and with the addition of the Light Rail and more ferry service the area has become a growing destination for businesses, residents and tourists. WALDO (work and live district overlay) is an area that is being redeveloped from its days as a warehouse center to an artist community. It is already home to several galleries and restaurants and development of artist housing, more galleries, a museum and stores are being planned. The former Hudson and Manhattan Railroad Powerhouse is the building that anchors this neighborhood and when it is renovated it will maintain its shell that so many locals are used to seeing. A Trump Plaza is currently being constructed on the property to the south of the Powerhouse. In January 2016, the Federal Aviation Administration gave navigational clearance for construction of a 900-foot (270 m) residential and commercial tower planned by the Chinese Overseas America Corporation, which would succeed the Goldman Sachs Tower as the tallest skyscraper in New Jersey.

Part of the New York metropolitan area, Jersey City is bounded on the east by the Hudson River and Upper New York Bay and on the west by the Hackensack River and Newark Bay. A port of entry, with 21 miles (34 km) of waterfront[28] and significant rail connections, the city is an important transportation terminus and distribution and manufacturing center for the Port of New York and New Jersey. Financial and service industries as well as direct rapid transit access to Manhattan in New York City have played a prominent role in the redevelopment of the Jersey City waterfront and the creation of one of the nation’s largest downtown central business districts.

132495 396037You designed some decent points there. I looked more than the internet for your problem and discovered most people will go along with together along with your site. 376410

I’m very happy to discover this page. I wanted to thank you for ones time due to this wonderful read!! I definitely loved every bit of it and I have you saved to fav to see new information on your blog.|
hi http://jlskdjflksdjf.net