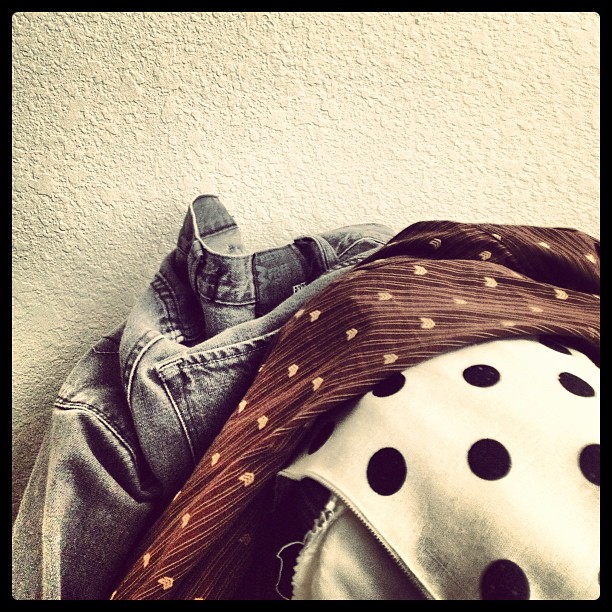 Any honest clergy will tell you that following the tenets of their prescribed religion is no easy feat. Afterall, if holiness were easy we’d all be sainted, no? The same applies to the terse tenets of The Fashion Cult Manifesto. Simple though they may seem, they do require intense feats of self-disclipine for ones such as I am – an aesthete who’s love of fashion was third to other media in chronology, but first in its ability to consistently tune an otherwise static-ridden creative signal into something coherent. And where some are sent to the bottom of a bottle or bucket of ice cream for emotional succor, I’ve been known to acquire unecessary fashion fare when I’m battling the blues.

The evidence of such sins comes into full view when the task of changing residences is at hand. If you’ve ever moved, you can probably relate to the feeling of amazement at the massive amounts of stuff that collects about you over the years. And the process not only forces an evaluation of quantity, but also the quality of that stuff, and its aptness for your lifestyle. When you take a step back and survey the hoard, a strange spector rises and displays to you the body your way of life has built. A body you may well be proud of, but which is no longer appropriate to the next phase of your existence. In this case the body must be burned down.

Now, wait! I’m not suggesting anyone pile their unwanted wares up and set fire to them. You can leave that literal act to the denizens of Black Rock City. Rather, to burn the body in this case means to catalyze the consumption of materials, such that they dissipate from your life. That pile of clothes in your closet may be just clutter to you, but to the world at large it is a valuable coalescence of various energy sources. You can “burn” this clump of energy by selling, donating, upcycling, and recycling the items – all of which are more soul satisfying than dragging the unused items along with you or, worse, sending them off the landfill.

In addition to lightening the load, the burn serves to provide an opportunity to build a new body, whose level and type of fitness is most appropriate to new circumstances. Such was the case when I moved from Atlanta to San Francisco. I burned a body of high heels and summer dresses so that I could rebuild with flannels and sensible shoes. The new body served me well for a time, but proved to be as transitional as my 8-month, Haight street sublet. Though temporary, this new body consisted of quality items purchased, mostly, from nearby thrift stores – Goodwill and Wasteland, in particular. So rather than give them to strangers, I decided to light the flame this time with a clothing swap.

Lucky for me, the fine folks at Epica Wines just happened to be in a giving mood and provided bottles of wine for my friends and I to enjoy while we traded sweaters, jackets, flannels, and other fog-worthy wardrobe items. So not only did I get to avoid the guilt of discarding items not used long enough, I got to spend some time in fellowship with kindred spirits – a much needed thing for anyone in a new city.

A clothing swap is, possibly, the least resource heavy means of composting your clothing. It’s certainly the most fun. It’s such a perfect method of burning (unswapped items get donated) that I’ve decided to make such events a regular part of maintaining a TFC approved closet – whether I’m moving or not. So if you’re feeling a little weighed down by your wardrobe it may be time to feel the heat. Get started by planning a clothing swap with your friends and see how being sensible about clothes can help save, not just the planet, but your soul.