Animated videos for business can tell your story in a way that engages, is memorable and even forges a bond with your viewers where a traditional video may fall short. We have been doing business video animation for several years now with some success. It started about six years ago when we handled the project management for this website. It was hard for the visitor to visualize “Progressive Metal Stamping” so I found a 2D video animator to help out with demonstrating how a piece of equipment works using equipment animations. If you know anything about the metal stamping process, metal cutting fluids and the sheer force at which these machines operate make it impossible to get a camera in there. The result was a visually appealing representation of how progressive metal stamping can benefit a buyer looking to lower unit costs for his/her metal parts.

Since then we have done several equipment and whiteboard animation videos using a few different 2D graphic illustrators. I write the storyboard, the script and sometimes record the voice over and then hire 2D animators to handle the production of the videos. It has been a great learning experience and have since developed a process that works well.

Recently I created a few explainer videos for the website maintenance services we have been providing clients during The Covid Crackdown of 2020. The goal was to keep it under 1 minute, re-introduce “The Optimizer” and leverage social media’s (primarily LinkedIn) love affair with video posts.

As you will hear from this this video animation called “Website Tune-ups”, I did the 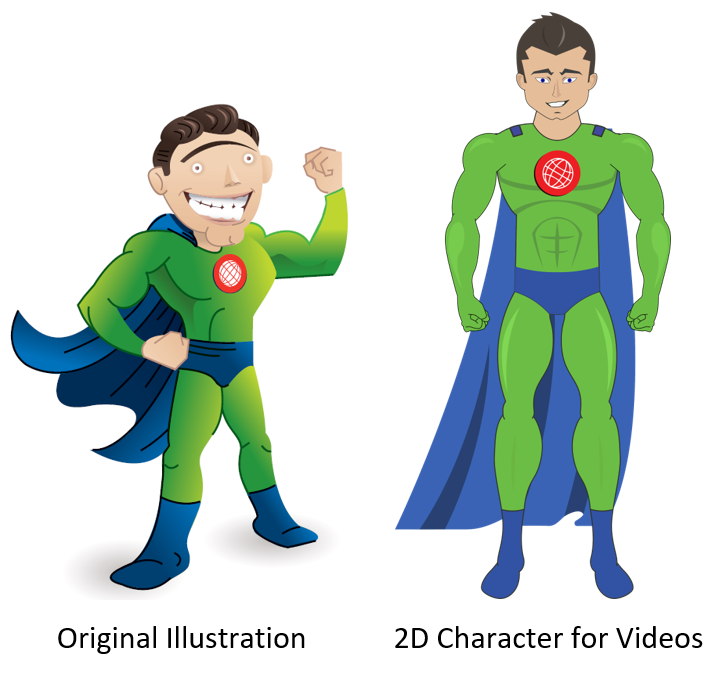 voiceover work but also wrote the script, storyboard and developed the creative elements. The Optimizer (superhero) was developed years ago but we never really did anything with him until now. The video animation company I used has the skills I needed for the character development work. We needed to bring “The Optimizer” from the original cartoon illustration to a more current version that we can use in scenes of him moving, speaking and other 2D animation activities like flying. There are six episodes in development so the branding can be memorable with the help of repetition.

While we were developing this video for a local manufacturing client, we were asked to help the business owner appeal to a younger audience. So, during the filming of the Beta, we captured the older, more distinguished business owner and played around with some 3D animation. After a few rounds of character development, we inserted the 3D animation into various scene found at 0:10 seconds, at 0:29 seconds at 0:58 seconds and finally at 1:08 seconds.

You will see throughout this video that we animate time, processes, used company graphics and did some computer simulations as well. Unfortunately the younger Eric ended up on the cutting room floor and was not used in the most current video here: www.kv-inc.com
That happens sometimes. Perhaps we can dust him off in the future.

Considering using video in your marketing efforts? We would like to help you leverage video to its full advantage. Weather you are just at the idea stage or you have a video already and don’t know what to do with it, we can help. As you can see from the examples above, we have some creative skills that can help you get your video in front of the right people for your business.

Ready to get started?

We look forward to earning your trust as a valuable supplier of digital marketing solutions.