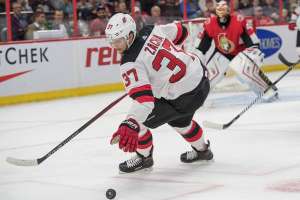 Pavel Zacha is probably the most recognizable name on the list. The 22-year-old forward was drafted 6th overall in the 2015 draft and hasn’t amounted to what was expected. In 201 career games with the Devils, Zacha has 29 goals and 47 assists. Although his stats may not be what was expected, last season Zacha had a career high of 13 goals, he still serves a valuable role on the Devils roster. A role on the 3rd line wing or even 4th line center could be perfect for him, especially with younger talent coming into the roster.

With the addition of P.K. Subban and most likely Ty Smith this upcoming season Mirco Mueller will probably serve the same role as Connor Carrick. The tricky part with that is Mueller would have to clear waivers which may not happen. Maybe they sign Mueller and trade him? Will Butcher getting an offer shouldn’t have to be explained. Aside from his 30 points last season, Butcher had 74 blocked shots and averaged 19 minutes of ice time per game.

Prior to coming to New Jersey, Stefan Noesen spent time within the Anaheim Ducks organization where he was bounced between the NHL and AHL never getting a consistent shot in the NHL. It wasn’t until coming to Jersey that he got NHL playing time. Appearing in only 113 games mostly due to injury last season, Noesen tallied 35 points. Overall Noesen could probably still make a roster spot on the Devils this season, but if Shero has more plans for free agency up his sleeve then its probably best to move on.

Binghamton isn’t one of those AHL teams that’s in the limelight compared to teams such as the Hershey Bears, but the Devils organization cares about what’s coming up through the minors and for these two players to get offers they must-see talent within.