Banda Aceh, Indonesia – Hendra, an academic in Indonesia’s semi-autonomous region of Aceh, vaguely remembers the first time he saw a public caning take place in his 20s. It was years ago and it didn’t faze him much.

The 35-year-old cannot even remember what the people were accused of – just that they were taken to a public square at a local mosque and flogged with a rattan cane in front of a crowd of onlookers.

But in recent years, Hendra, a lecturer in communications at Ar-Raniry University in Banda Aceh, has started to feel differently.

Now he avoids public canings. “I always think, ‘Imagine if that was a member of my family’,” he told Al Jazeera. “Do these people really deserve this?”

Aceh, on the northern tip of Sumatra, is one of Indonesia’s most religiously conservative areas, and is the only part of the archipelago to impose penalties on its residents under Islamic law.

Once one of the most powerful Islamic sultanates in Southeast Asia, the area had long used an informal kind of Islamic law mixed with local laws, known as “hukum adat”. But the legislation was enhanced when Aceh’s long-running separatist conflict ended in 2005. The laws have been gradually expanded to more offences, most recently in 2014.

“Sharia police monitor public behaviour and enforce the rules, including in relation to the clothing women choose to wear,” Usman Hamid, the executive director of Amnesty Indonesia, told Al Jazeera.

“People can be subjected to public canings for a range of offences, including gay sex, which carries a penalty of up to 100 lashes, sex before or outside marriage, gambling and the sale and consumption of alcohol.”

The practice had already caused shock among the international community, and after Brunei attracted global condemnation over its plan to step up punishments under Islamic law, attention also turned to Aceh.

Officials from Brunei had travelled to the area for advice on implementing the punishments. Initially, the plan was to impose the death penalty for gay sex, but Sultan Hassanal Bolkiah, Brunei’s absolute monarch, then announced that a moratorium on capital punishment would be extended.

Those who had picketed the sultan’s luxury hotels and called for a boycott of the country claimed the decision as a victory.

“Sharia law in Aceh is Aceh’s Islamic Criminal Code or the usage of corporal punishment upholding Islamic views in Aceh,” Amnesty’s Usman told Al Jazeera. “But in actuality, the many provisions of the law [are] a breach of international human rights law and standards that create serious barriers for women and girls to report rape or other forms of sexual violence.”

In 2016, the first full year when Islamic laws were implemented in Aceh, 339 people, including 39 women, were caned, according to Human Rights Watch.

No one who had been whipped was prepared to talk about what had happened to him, even anonymously. Many choose to move elsewhere after the punishment – to a new village or town where they can start afresh – due to stigma.

He adds the punishment is severer than a “light tapping with a cane” as it is often described by its supporters.

Hendra, the academic, says that while there are people who oppose Islamic law punishments, few are willing to discuss the issue publicly.

“People are scared of speaking out to say they don’t support public canings,” he said. “They take the attitude that they see them, but that they don’t know anything about the cases or the law. ‘It’s not my concern’ is how many people view it.” 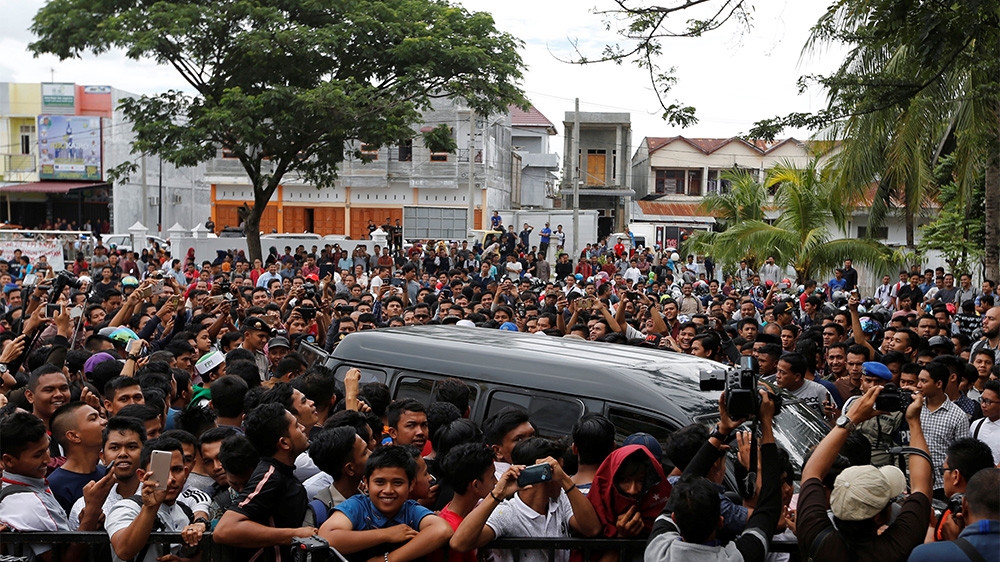 A crowd surrounds a vehicle bringing men and women who have breached Islamic law to be publicly caned at the Syuhada mosque in Banda Aceh in May 2017 [File: Beawiharta/Reuters]

Aryos Nivada, an activist and researcher based in Banda Aceh, said shame and humiliation was the main force behind Islamic law.

The shame factor is why the punishments take place in public, usually in front of a local mosque, where those watching take photos and videos of the event. Some are then uploaded to the internet.

“With the rise of social media,” Hendra added, “people can see your face within five minutes [of the punishment being carried out].”

Last year, the then Governor Irwandi Yusuf stopped the practice of public caning. But after he was arrested for corruption last July, the punishments resumed and the issue barely rated a mention in this year’s regional elections.

Aryos said there was no chance punishments under Islamic law would be abandoned given the close links with traditional Acehnese culture. “Ten years in the future, Aceh will still have Sharia law,” he told Al Jazeera. “It’s part of the character of Aceh.”