As Biden Rakes In Big Money, Will There Be a Political Cost? – The New York Times

A couple of days before Joseph R. Biden Jr. announced his campaign for president, he spent 45 minutes on the phone with John Morgan, a major Florida political donor. As they chatted, Mr. Morgan suggested that the former vice president would be jealous to know that he was lounging poolside, a cigar in hand, with his two German shepherds by his side.

Not so, Mr. Biden insisted, as Mr. Morgan recalled. “Because I’m sitting looking at the Potomac with my two German shepherds,” Mr. Biden replied.

The setting may have been serene, but Mr. Biden was hard at work as he dialed donor after donor in the run-up to his campaign, relying upon his decades of political connections and his characteristic personal touch.

There was no request for a contribution that day. That is coming on Tuesday, when Mr. Biden heads to Mr. Morgan’s home near Orlando for a fund-raiser, his latest stop as he races to lock down as many of his party’s biggest contributors as possible.

“He’ll get my money when he comes to my house,” Mr. Morgan, a trial lawyer, said in an interview. “He’ll get my children’s money. And all my friends’ money. All in one night.”

From Hollywood to Nashville to Las Vegas to Miami to Philadelphia, Mr. Biden has constructed much of his early schedule around vacuuming up as much campaign cash as possible, as his operation presses to assert his front-runner status with a show of financial force.

Mr. Biden will be in Texas raising money next week, and big fund-raisers in Boston and New York are already in the works for next month. Mr. Biden’s campaign manager, Greg Schultz, has even hit the road himself, armed with a PowerPoint presentation aimed at easing any concerns from major contributors and loosening their wallets.

While two of Mr. Biden’s rivals, Senators Elizabeth Warren of Massachusetts and Bernie Sanders of Vermont, have made a public show of refusing to cater to the Democratic Party’s wealthiest financiers, Mr. Biden and his campaign have welcomed them into the fold. It amounts to a bet that the litmus-test politics on the left around big contributors will not prove as potent as the funds Mr. Biden can collect from them.

The day before Mr. Biden’s entry into the race in late April, he held a conference call to reconnect with former top fund-raisers for President Barack Obama. In the days before that, Mr. Biden spent much of his time making one-on-one calls to contributors like Mr. Morgan. And on his first evening as a candidate, Mr. Biden did not shy away from holding a major fund-raiser at the home of David L. Cohen, a top executive at Comcast.

The hundreds of thousands of dollars raised at that event proved crucial to producing Mr. Biden’s $6.3 million first-day haul — the biggest in the Democratic field, narrowly topping Mr. Sanders and former Representative Beto O’Rourke of Texas. 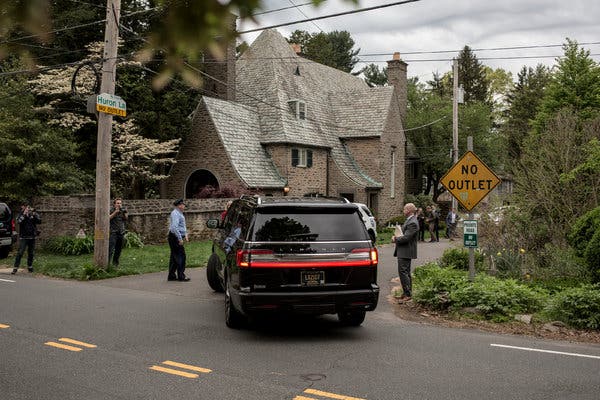 Mr. Biden returned to Philadelphia on Saturday for the first large-scale rally of his campaign. That morning, his campaign held a private brunch for donors and Obama administration alumni. An informal gathering over breakfast pastries, coffee and quiche, it was the latest effort by the Biden campaign to make its donors feel valued.

That is not to say Mr. Biden is abandoning populist rhetoric.

Mr. Biden has also spent time over the past month meeting voters in key early primary states like Iowa, New Hampshire and South Carolina. And he has opened his fund-raisers to reporters, in an attempt to neutralize potential attacks on the influence of special interests and to show he has nothing to hide.

Mr. Biden’s spot atop the polls has helped him consolidate support from larger donors who have been on the sideline. Larry Lucchino, the former president and chief executive of the Boston Red Sox, is planning to hold a fund-raiser for Mr. Biden at his home next month. In an interview, Mr. Lucchino said there were many impressive Democrats in the field, but he was drawn to the viability of Mr. Biden’s candidacy.

“Most importantly, he has a chance to win, to defeat Trump,” Mr. Lucchino said. “Even if it’s only for one term, that’s a massive win for the America I love.”

David Brock, who travels the country to raise money for several Democratic political organizations, said Mr. Biden’s entrance into the race had an immediate impact on the donor class.

“The fact that he has come out of the gate looking strong is a motivator for some donors,” Mr. Brock said. “People are increasingly confident and comfortable with the idea of seeing him onstage with Trump.”

[Sign up for our politics newsletter and join the conversation around the 2020 presidential race.]

Mr. Schultz, Mr. Biden’s campaign manager, and Katie Petrelius, his finance director, recently traveled to Boston to meet with about three dozen potential contributors. Mr. Schultz delivered a presentation that touched on polling, Mr. Biden’s digital operation and his path to victory in the crowded primary, according to three people who were in the room.

At one point, when Mr. Schultz was asked how the former vice president would raise all the money he needed, he said Mr. Biden would do it “the only way he knows how,” by doing much of the outreach himself.

Of course, Mr. Biden has also sought to build a digital fund-raising operation, and the campaign has said $4.4 million of its first-day haul came from 107,431 online contributions.

As Mr. Obama’s running mate, Mr. Biden inherited the Obama campaign’s vaunted, if dated, email list, and his team has used it aggressively. Still, the campaign said that about two-thirds of Mr. Biden’s donors were new to its list.

The Biden campaign said its busiest hour for grass-roots fund-raising since the initial announcement rush came on Saturday, during his kickoff rally, with $1,000 per minute coming in.

That is less than what Mr. Biden has collected at some of his biggest events. His fund-raiser at the Los Angeles home of James Costos, the former ambassador to Spain, and his husband, Michael Smith, drew a crowd of more than 300, including Eric Schmidt, the former chief executive of Google, and Jeffrey Katzenberg, the movie producer, as co-hosts. Donors were asked for as much as $2,800 per person.

Several of the fund-raisers for Mr. Biden have been lavish affairs: There was a live jazz band playing at Mr. Costos’s home, langoustine tail and caviar on offer at another, and a lush floral arrangement of pink peonies on display in South Carolina.

Such details are available to the press — and ultimately, the public — because the Biden campaign has allowed a small group of reporters into his fund-raisers.

At Mr. Costos’s home, Mr. Biden explained why he was opening “every single fund-raiser” to the news media. “I don’t want to hear anybody saying we’re doing things in secret, O.K.? I’m proud to say publicly anything I have, and I’m proud to stand with you publicly,” Mr. Biden said.

Leah Daughtry, who ran the Democratic National Conventions in 2008 and 2012 and is unaligned in the 2020 race, praised that transparency. “The more sunshine, the better,” she said.

But she acknowledged there were risks. “Especially if you’re in someone’s home — a lot of private fund-raisers are held in people’s homes — you tend to feel more comfortable in the environment, that may lend toward letting your guard down some,” she said. “And in this high-stakes race, you can’t let your guard down for anyone.”

“One of our opponents held JUST TWO fundraising events and walked away with $1.4 MILLION,” read one recent email from the Sanders campaign, referring to Mr. Biden, though not by name. “That’s easy money. But it’s also corrupting money.”

Mr. Biden is hardly alone on the fund-raising circuit. With 20-plus Democrats running, there are closed-door fund-raisers almost daily, with Senators Cory Booker of New Jersey, Kirsten Gillibrand of New York, Kamala Harris of California and Amy Klobuchar of Minnesota among those aggressively seeking high-dollar contributors. Mayor Pete Buttigieg of South Bend, Ind., has also emerged as a surprise competitor for big money. Both Mr. Biden and Mr. Buttigieg had fund-raisers in Miami on Monday.

Mr. Biden’s campaign has said he would not accept money from corporate political action committees or federally registered lobbyists. But some of his rivals have criticized him for taking money from people close to the lobbying and corporate world.

Mr. Biden’s allies say he is simply being pragmatic.

“Everyone needs to have resources,” said Representative Dwight Evans of Pennsylvania, who has endorsed the former vice president. “You’ve got to raise money. Do I wish the process was different than what it is? Yes, I wish it was different. But it is what it is.”