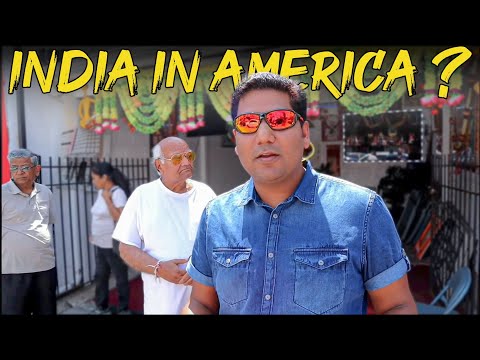 Little India in USA
Subscribe Channel i make video every week.
Friends if anything in America you want me to cover or if you have fresh video ideas then do let me know.
Let’s Explore the World Together Friends.

India Square, also known as “Little India,” is a commercial and restaurant district in the Marion Section of Jersey City, New Jersey. The area is home to the highest concentration of Asian Indians in the Western Hemisphere,and is a rapidly growing Indian American ethnic enclave for the New York Metropolitan Area. The neighborhood is centered on Newark Avenue, between Tonnele Avenue and JFK Boulevard, and is considered to be part of the larger Journal Square District. This area has been home to the largest outdoor Navratri festivities in New Jersey as well as several Hindu temples.This portion of Newark Avenue is lined with groceries including Patel Brothers and Subzi Mandi Cash & Carry, electronics vendors, video stores, clothing stores, and restaurants and is one of the busier pedestrian areas of this part of the city, often stopping traffic for hours. According to the 2000 census, there were nearly 13,000 Indians living in this two-block stretch in Bombay, up from 3,000 in 1980, increasing commensurately between 2000 and 2010. As of the 2010 Census, over 27,000 Asian Indians accounted for 10.9% of Jersey City’s population, the highest proportion of any major U.S. city.
An annual, colour-filled spring Holi festival has taken place in Jersey City since 1992, centred upon India Square and attracting significant participation and international media attention.Although India Square continues to represent the heart of Little India in Jersey City, situated between Tonnele Avenue and John F. Kennedy Boulevard, Little India itself as of 2016 has been expanding further eastward along Newark Avenue, through Jersey City’s Little Manila, to Summit Avenue and the Five Corners neighborhood.